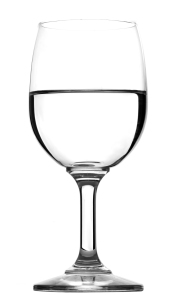 You are probably familiar with the dilemma of a glass being half-full or half-empty.  It’s obvious the glass has only one amount of liquid, but it’s a person’s perception of it that colors their outlook.  Someone who considers it half-empty probably sees that there is only so much left before it is all gone – and “then what will we do?”  On the other hand, those who see it as half-full probably think, “Wow!  I still have half the glass left to drink!”  I couldn’t help but see myself in this principle during a time of change in my life.

While I recognized the hand of the Lord in the changes, I was focused on the ending of things, resulting in a sadness permeating everything I did or thought.  As I prayed before bed one night, however, knowing the next morning would be the first day following the “end”, the Lord spoke to my heart that it was really the first day of the beginning I was facing.  I was actually stepping into something brand new, not just leaving something behind.  It is an understatement to say this simple sentence changed my whole outlook!  Though I still didn’t know what I was beginning, and things really were ending, I now saw it from God’s perspective.  I now saw my glass as half-full, rather than half-empty.  Further, I could see He was beginning the process of filling it up again – with new and different experiences to add to those He had given me before.

Philippians 3:13-14 “13. . .Forgetting what is behind and straining toward what is ahead, 14 I press on toward the goal to win the prize for which God has called me heavenward in Christ Jesus.” (NIV)

Had I continued to dwell on the endings – with a half-empty glass mentality – I’m sure I would have missed much of what the Lord had for me in the changes.  I couldn’t have pressed forward with my all because I’d have been looking backwards – and that makes progress difficult, if not impossible.  God’s Word changed my perspective so I could see the glass as half-full, awaiting His refilling, no longer half-empty and running out.  Sadness was replaced with excitement and anticipation about the new things Daddy had for me in this adventure of life in Christ, because it’s not the end, but the beginning!

Proverbs 3:5-6 “5 Lean on, trust in, and be confident in the Lord with all your heart and mind and do not rely on your own insight or understanding.  6 In all your ways know, recognize, and acknowledge Him, and He will direct and make straight and plain your paths.”  AMP

1 Corinthians 11:1 AMP  Pattern yourselves after me [follow my example], as I imitate and follow Christ (the Messiah).

Paul spoke this sentence to the believers in Corinth.  Paul – the one who has been portrayed by many teachers and preachers through the years as proud and arrogant.  Paul – the one who has been made out to be a chauvinist.  Paul – who went after Christians in every way he could, even going so far as having them killed, attempting to stop the spread of the gospel prior to his dramatic conversion on the road to Damascus.  This same Paul has the audacity to say to believers to pattern themselves after him as he imitates and follows Christ.  How dare he say that?!  Would a humble Christian say that?!

Paul’s confidence appears to many to be self-confidence.  His boldness to declare in Acts 20:26, “I am innocent of the blood of all men,” looks like an outright lie to those who know his past.  That’s what stops most of us from telling others that we are innocent, or to follow us and imitate our example as we follow Christ.  We know the wrongs of our past, and we know others know them, too.  We would never consider ourselves good enough, pure enough, or righteous enough, so the last thing we’d want is for others to imitate us.  But is that what we are to consider?

Paul was not deceived, in denial, or suffering amnesia.  He practiced what he taught, and he taught what the Lord taught him – that we are to leave the past behind (even the positive) and press on toward the mark (Phil. 3:13-14).  He understood that when Jesus forgave His sins, they were no longer to be his focus, as they were truly washed away by His blood.  He needed but to go forward in the Lord, seeking to know Him more and to make Him known (Phil. 3:10) – not continually re-examining past sins, or receiving the judgments of others who wanted to do so.

When Paul called others to imitate him, there was no pride or self-confidence at all.  There was complete confidence in Who Jesus Christ is, knowing the power of the Holy Spirit alive in him, enabling him to follow Christ and lead others in the same way.  He knew the authority and the righteousness of Christ in him, and that God called him righteous because of Christ.  His focus was not on his sin, but on the completeness of Christ in him, Who is so much greater than all sin.  Jesus called Paul to follow Him and become His disciple, so he chose to do likewise.

As believers, we can have this same confidence in Christ – this same boldness to call others to follow our example.  It comes from focusing on our risen Savior, not on our old, fallen nature.  It also comes from believing the Word.  We have a new nature.  We are God’s righteousness, risen with Christ, seated with Him in heavenly realms.  It is not based on our feelings, but on His Word and what He has done.  He did it for Paul.  He’s done it for us.  Making disciples means giving them an example to follow.  So, like Paul, we can choose to say, “Follow me, as I follow Christ.”